Recently, my work changed its policy on nose piercing (allowing piercings 2mm or smaller) and, being a staff of young women, we were all pretty excited about our new freedom. A group of four girls (myself included) planned a trip to a tattoo and piercing shop together so we could bond over decorative nose jewelry.

When I got home that night, I told my husband my plans. He was less enthused. “Please don’t,” he said. “I really don’t like how they look.”

Now, I will openly admit that perhaps the most childish trait about me is that I HATE being told what to do. In fact, even if I was already planning on doing one thing, if someone tells me to do it (not asks or suggests but tells, as if I don’t know what is best for me), I will almost certainly do the opposite thing instead. In my  actual wedding vows, I said, “I vow to never let you tell me what to do, but to always take into account your opinion on important decisions.” That’s fair, right?

Herein lied my dilemma. My husband didn’t tell me what to do. He didn’t even suggest it. He just asked me not to do something. And, vows aside, I really do respect his opinion. But, I really wanted to pierce my nose.

I asked the opinion of one of my very close friends. She is a successful doctor, a homeowner, an amazing chef, and a thoughtful, funny, charismatic woman. I explained my situation to her and her response was, “That’s why I don’t have a tattoo. My boyfriend hates them.”

My immediate reaction was a strong one. How dare he? I thought. She is a strong, independent woman and she doesn’t need his permission to do what she wants with her own body! That’s bullshit! She should go get TEN tattoos!

So you can see where my cognitive dissonance was coming from. I am a proud feminist and I never imagined making decisions based on what someone else wanted me to do. I felt anxious and nauseated at the thought.

The day came and my friends texted me to see if I was still in. I told them I was undecided. I still had a few hours to decide (and to make up an excuse other than ‘My husband doesn’t want me to,’ if I decided to ditch out. That would be too shameful to admit.)

As the afternoon wore on, I brought it up to my husband. I was going to tell him that I respect his opinion but still felt that, when it comes to my own body, I should get final say. “The girls are all going to get their noses pierced tonight. What if I went with them?”

His response reaffirmed why I chose this man as my life partner. He said, “If you want to get one, you should go. I want you to be happy and if this will make you happy, I support it.” Heart eyes forever, right? And I didn’t even have to give him my speech.

So, the full group of us went to the shop and squeezed shut our eyes as a REALLY big needle was jammed through our nostrils and then giggled as we tried not to sneeze.

Turns out, two of my friends had had similar conversations with their own spouses. I’m happy that all of us decided we got to choose what we do or don’t do with our own noses. Even though a nose ring seems like such a small choice, it feels important to me that I made the decision based on what I wanted, not on pleasing other people.

I remember my therapist told me once, “The more confident and happy you are with your choices, the less it will matter what everyone else thinks about them.” I am happy with my choice. 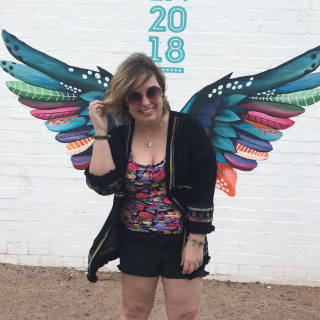